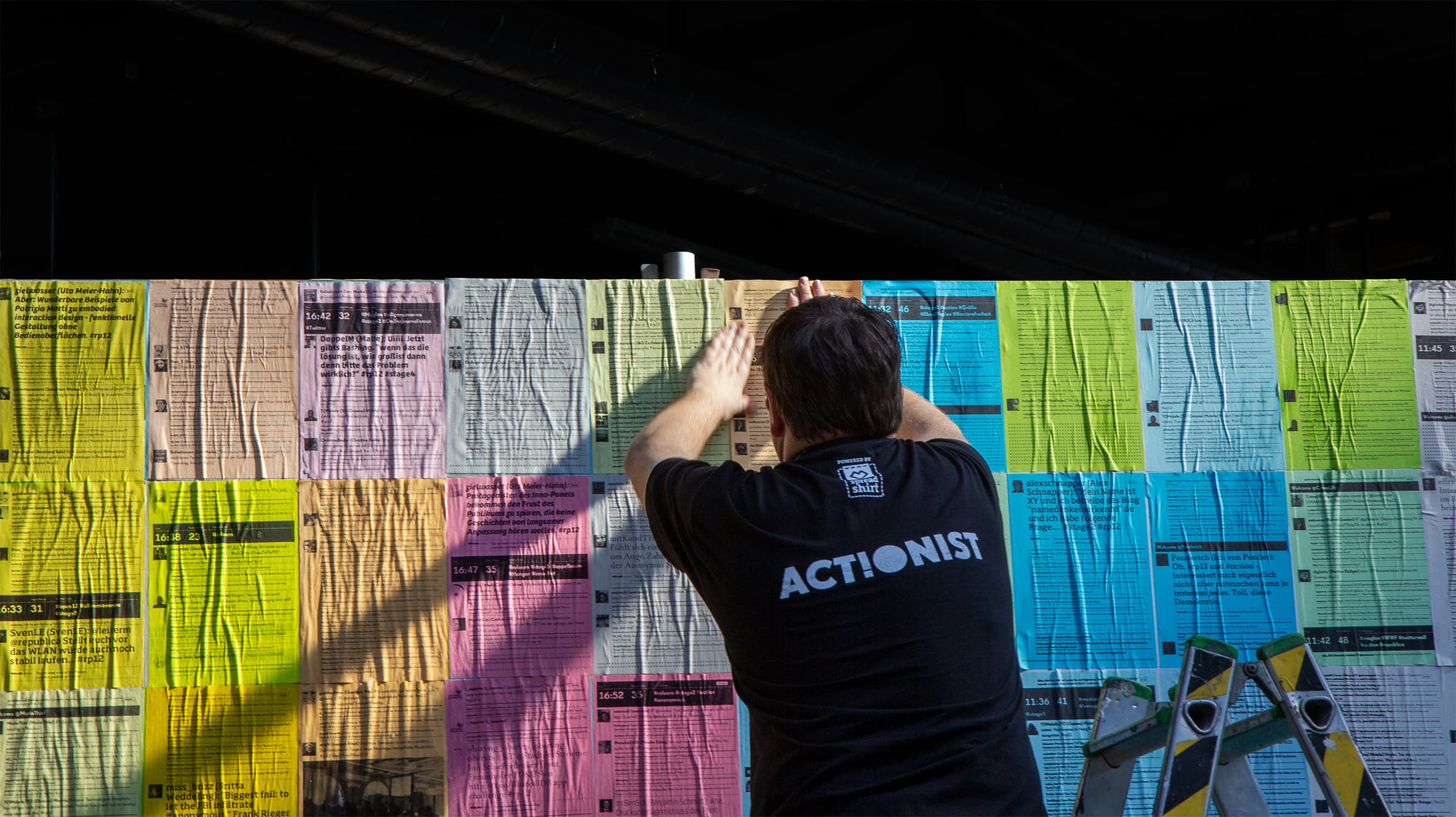 Working on the 2011 edition of re:publica – Europe’s largest conference for social media, digital culture and net politics – was an extreme experience. Extremely stressful, extremely fun, extremely annoying, and extremely rewarding in the end.

After the dust settled, we weren’t sure, if we wanted to be involved in the following year. But when Tanja and Johnny from re:publica asked us again, we all felt an itch and said yes. It turned out to be even more extreme than the year before.

One thing that got us excited for another roller coaster ride was the new location. Instead of using already equipped and predefined spaces as in the years before, the conference moved to Station Berlin, a former freight railway station. When we visited the space for the first time, we were flabbergasted. And scared shitless. The halls were enormous. And so empty. 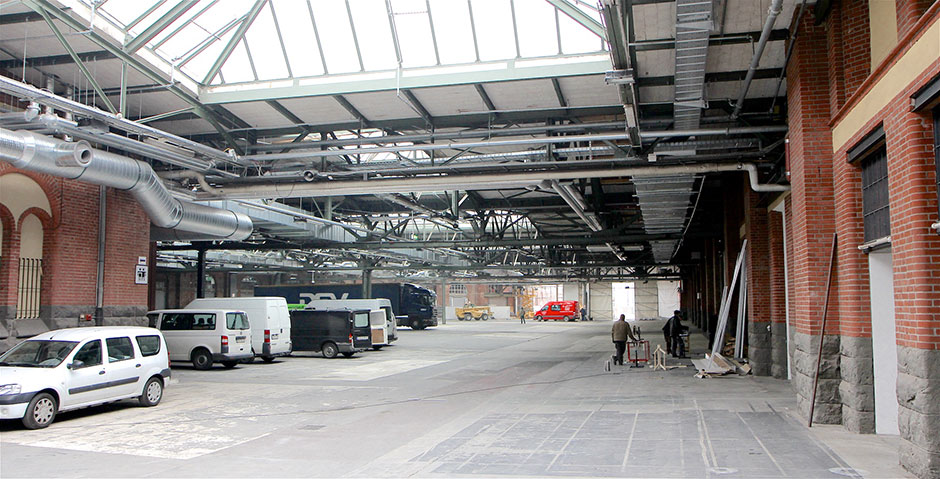 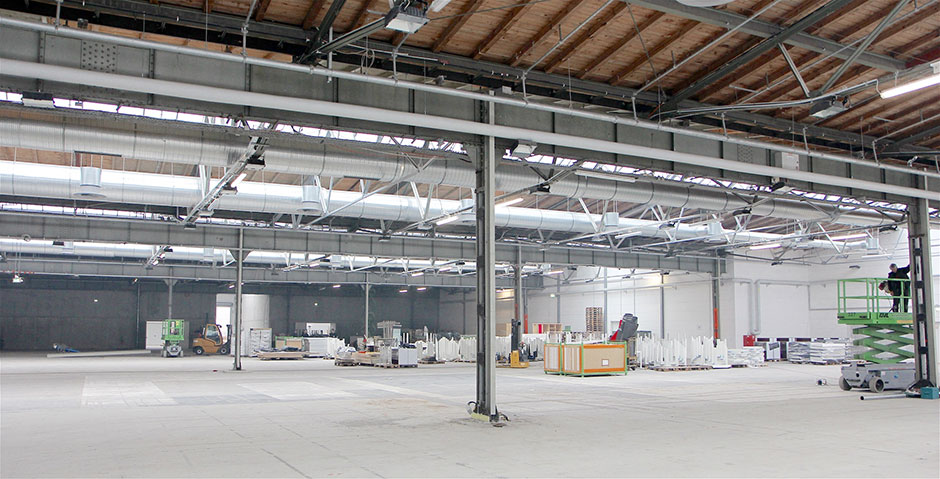 The hall were the main stage was build.

We had total freedom about the design. Just the conference motto was set: ACTION. It was the year after the Arab Spring and Occupy Wall Street. These movements were initiated or strongly amplified by internet communication, but led to real world protests — visible action.

Inspired by this theme, one of the first images that came to our minds were people doing something physical, getting their hands dirty, sweating. At an event were the majority of attendees is looking at their laptops or smart phones constantly — blogging, tweeting, emailing — we didn’t want to add more screens to stare at. Instead our goal was to transfer the virtual to the physical space and create some visible action.

One of the obligatory things at a conference like this is a twitter wall, a place where all the tweets about the event are collected and visualised. The year before we turned the twitter wall into a color war game with tweets serving as building blocks for a generative thematic map. It was displayed at the large screen on the main stage.

But this year we didn’t want the tweets to appear on a screen.

Our concept was rather sketchy when we first presented it to the re:publica team: “We will print out all the tweets and put them on a huge wall!” Luckily they knew us from the year before. Otherwise they probably would have considered looking for a new design partner. But instead of questioning our sanity, they heard us out. They understood what we were aiming for and trusted us enough to erect a 14 x 3 meter scaffolding construction right in the middle of the most busy area of the location. 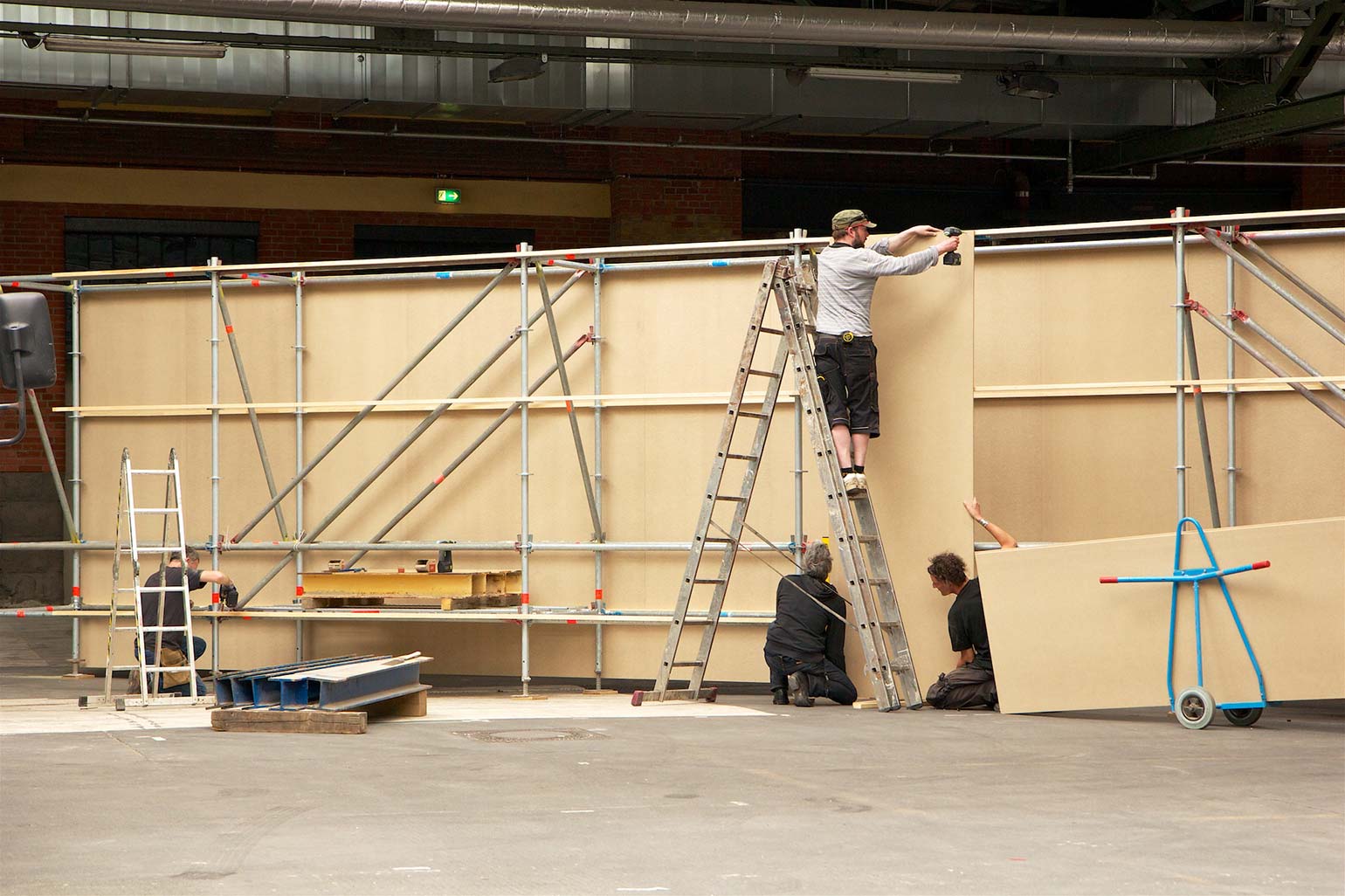 We asked for something big, we got something gigantic: A 14 x 3 meter wall.

To get the massive amount of tweets (38378 in 3 days) quickly on a 42 square meter wall, we needed a smooth workflow between software, hardware and humans.

We wrote a program that grabs all the tweets with the hashtag #rp12, layouts them nicely on a DIN A4 sheet (more prominent tweets are emphasized to add rhythm) and sends them to a printer. A grid coordinate is printed on every sheet to ensure the proper position on the wall. This was not only important to keep the chronology of the tweets, but also for the visual design. If you have a look at this video, you will see why.

Since we had no chance to test-drive the whole thing properly, we were quite nervous when the door opened and tweets with the #rp12 hashtag poured in. But everything went fine. The software ran smoothly, the printer was fast enough and paper jams were rare. The human element of our workflow performed even better. The volunteers who pasted the sheets on the wall were all highly motivated, some of them even wanted to extend their 6-hour shift.

Even though everything worked out as planned, there was something beyond our control: the reactions of 4000 attendees. Will people get the idea? Will they like it? How will they interact with it? We did our best to design for a great experience, but we could only assume how people experience it.

All our concerns vanished pretty quickly when we saw how people interacted with the wall. Not only did they gather in front of it to read the tweets — quite often with a smile on their face. A lot of them even photographed printed tweets and… well… posted them on Twitter. Actually, the twitter wall became the most photographed motif of the conference.

The analogue twitter wall was one of the highlights of #rp12 for me http://t.co/r68zYlBF

It was also interesting to see how a quick and transient medium like Twitter feels like when manifested. Since it took about 6 hours to fill the wall, the tweets survived relatively long compared to the usual twitter walls, where they often appear only for a few seconds. The massive wall and the familiar size of DIN A4 sheets also visualized the enormous amount of data far better than an abstract digital representation could. Although these aspects were something we aimed for when developing this installation, we were still surprised about the impact it had. Size, in this case, really does matter.

The twitter wall was only part of our job, though. We were also commissioned to create the identity of the conference, including promotional material, stage design and signage.

Slapping print-outs of tweets to a wall was one of the first ideas we had, and it stuck with us. It became the core of the whole design concept, our leitmotif. The aesthetics of cheap printing on ordinary sheets of paper reminded us of political pamphlets, which resonated with the conference theme. And we also liked getting into action ourselves.

Inspired by the Dogme 95 movement, we created our own set of rules:

To do so, we set up a workshop two days prior to the event at the location. Equipped with two large xerox machines, a ton of coloured recycling paper, a few desks and our laptops, we started to layout and print the sheets for stage backdrops and signage. One by one we stapled or glued them on boards. 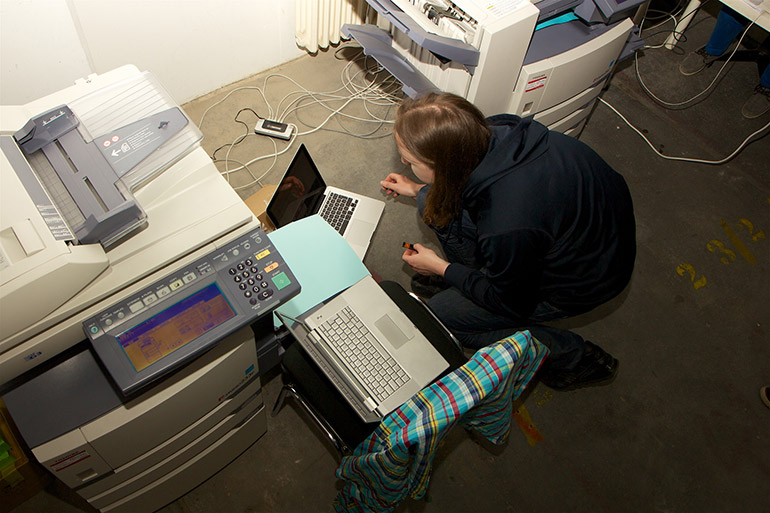 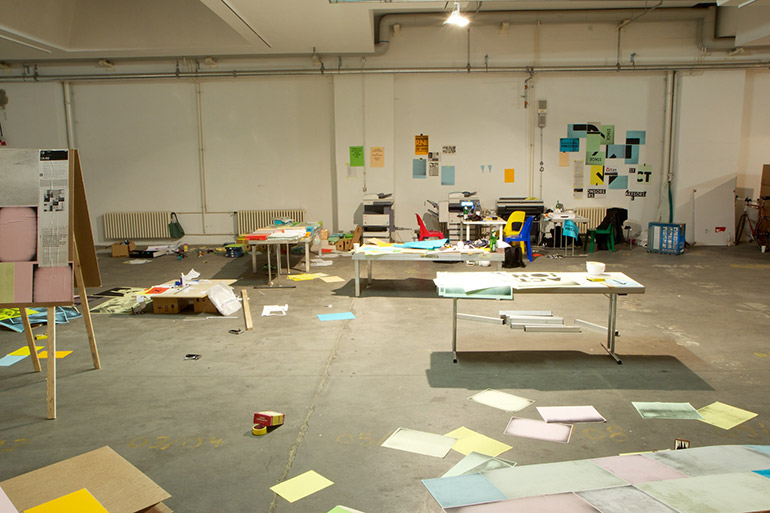 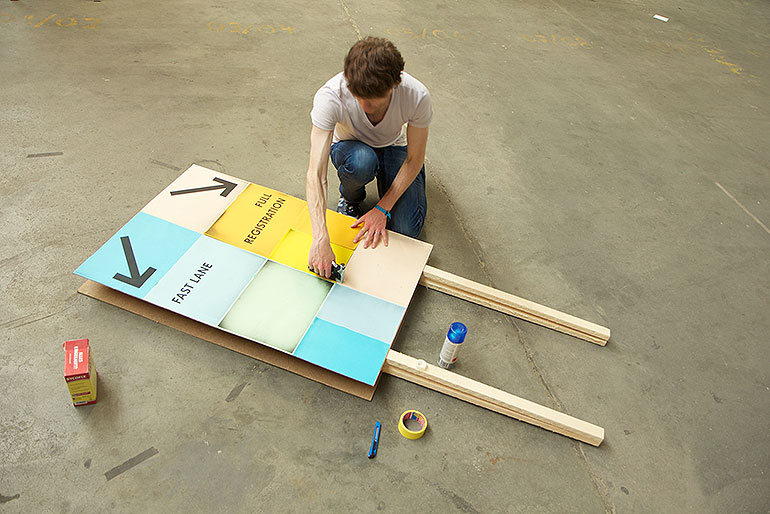 We got all signs and walls covered and mounted when conference started. But we weren’t done yet. Additional signs were produced on the fly during the 3-day event. There was always action in our workshop. 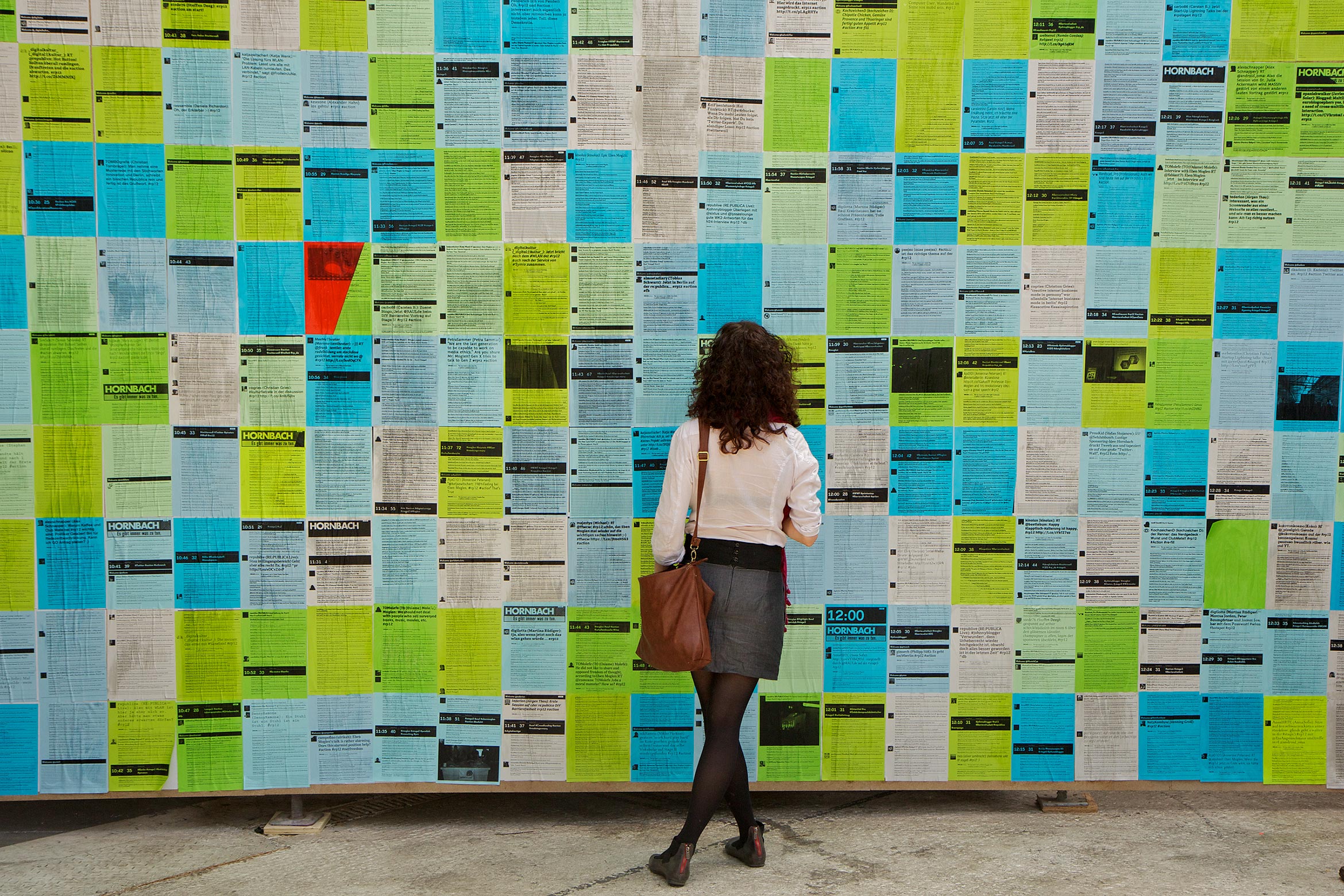 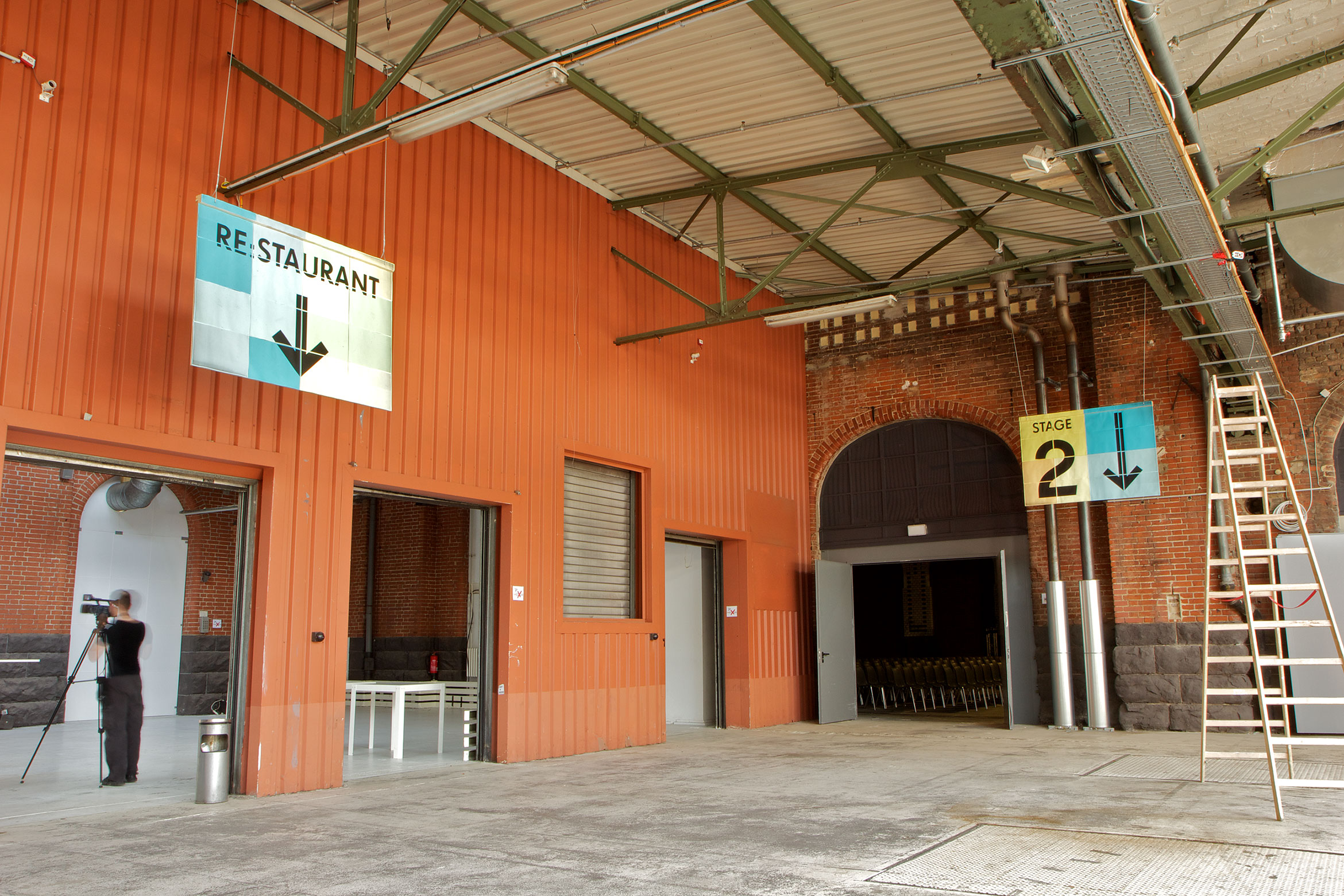 All the signage was made on site using standard paper sizes and a xerox machines. 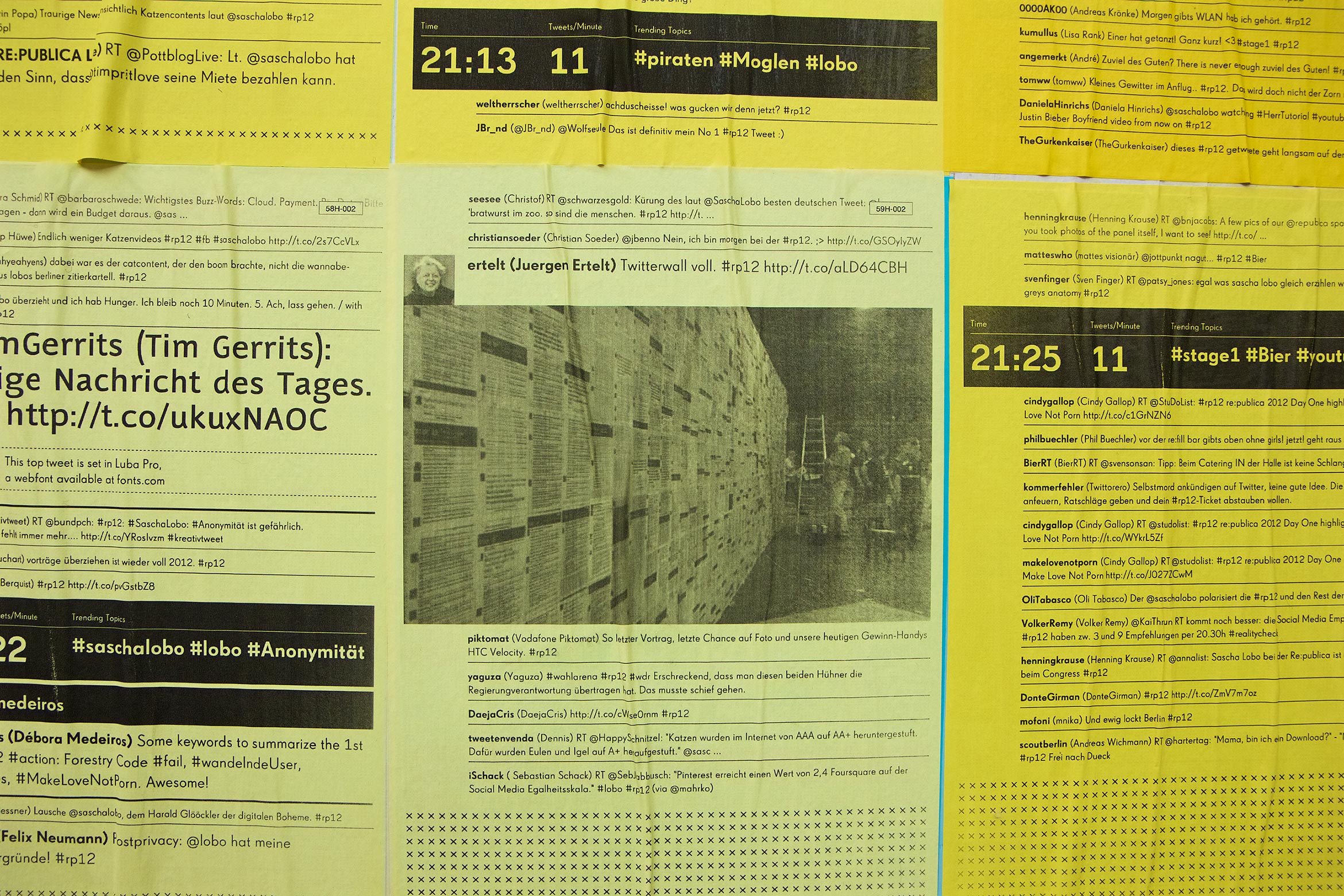 Besides tweets, we also showed other information like trending topics and frequency. 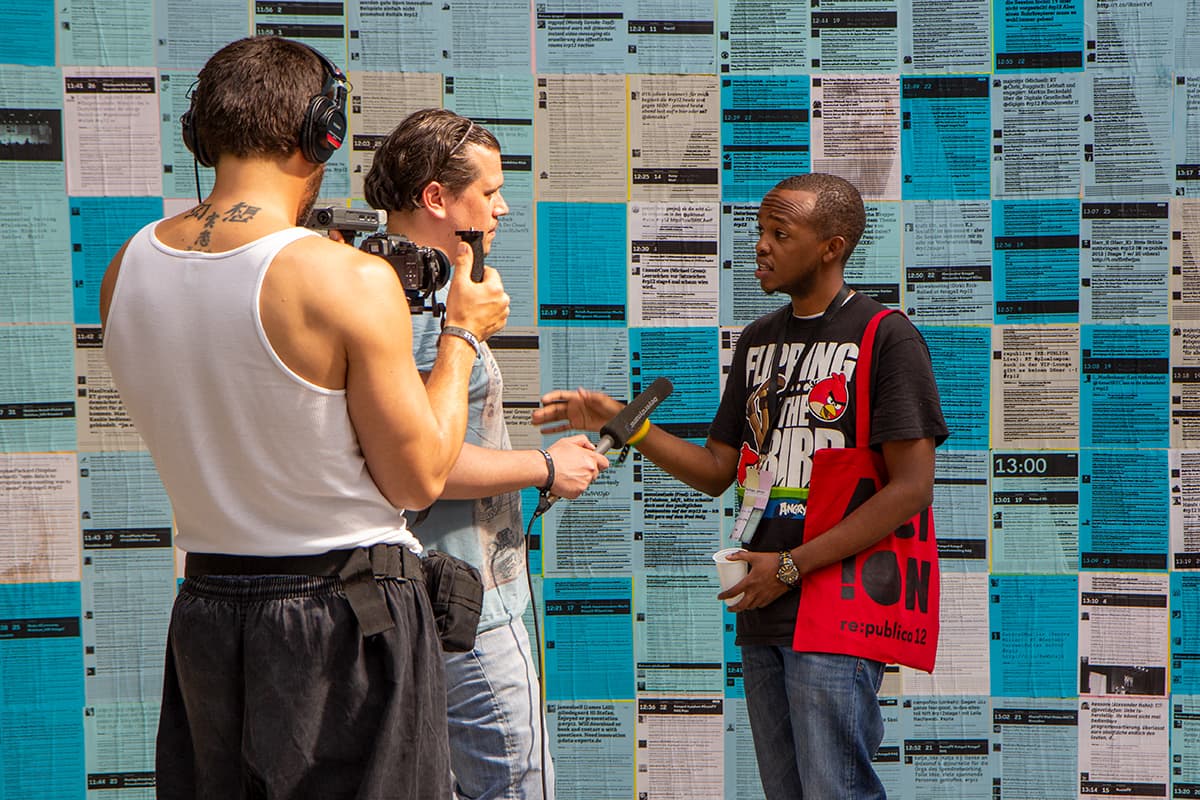 The wall was the most photographed motif of the conference and was often used as a backdrop for interviews. 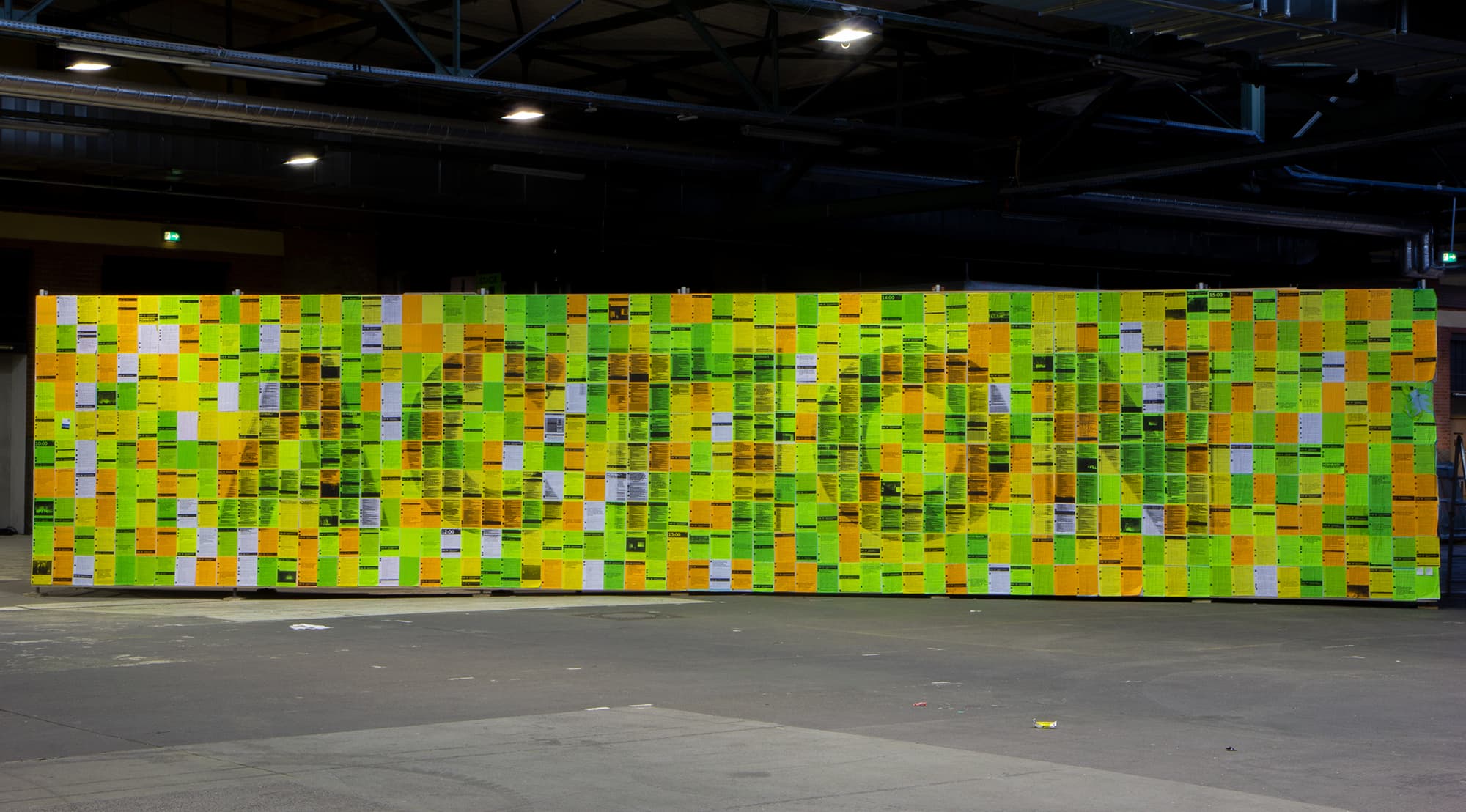 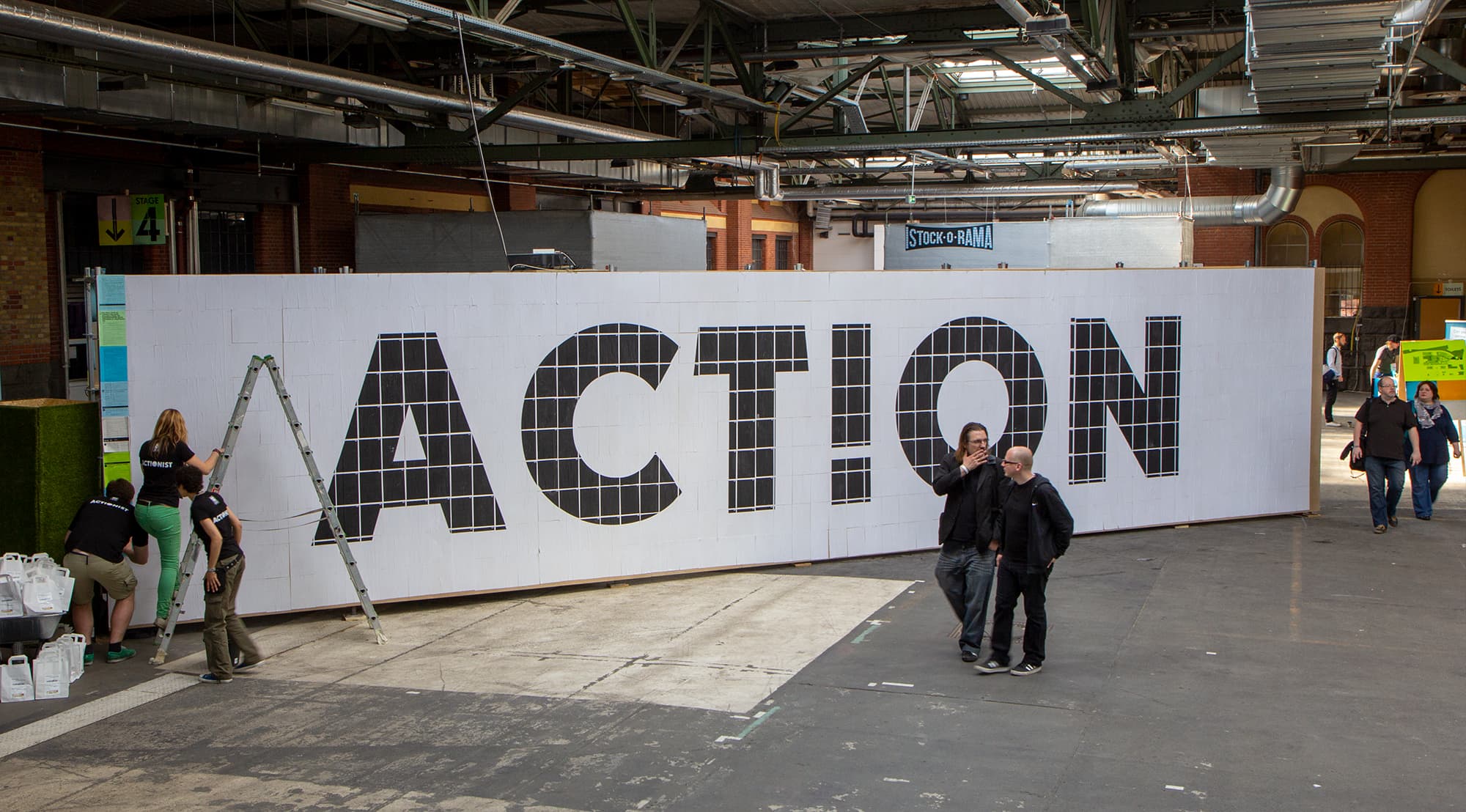 The first tweets are glued to the wall. 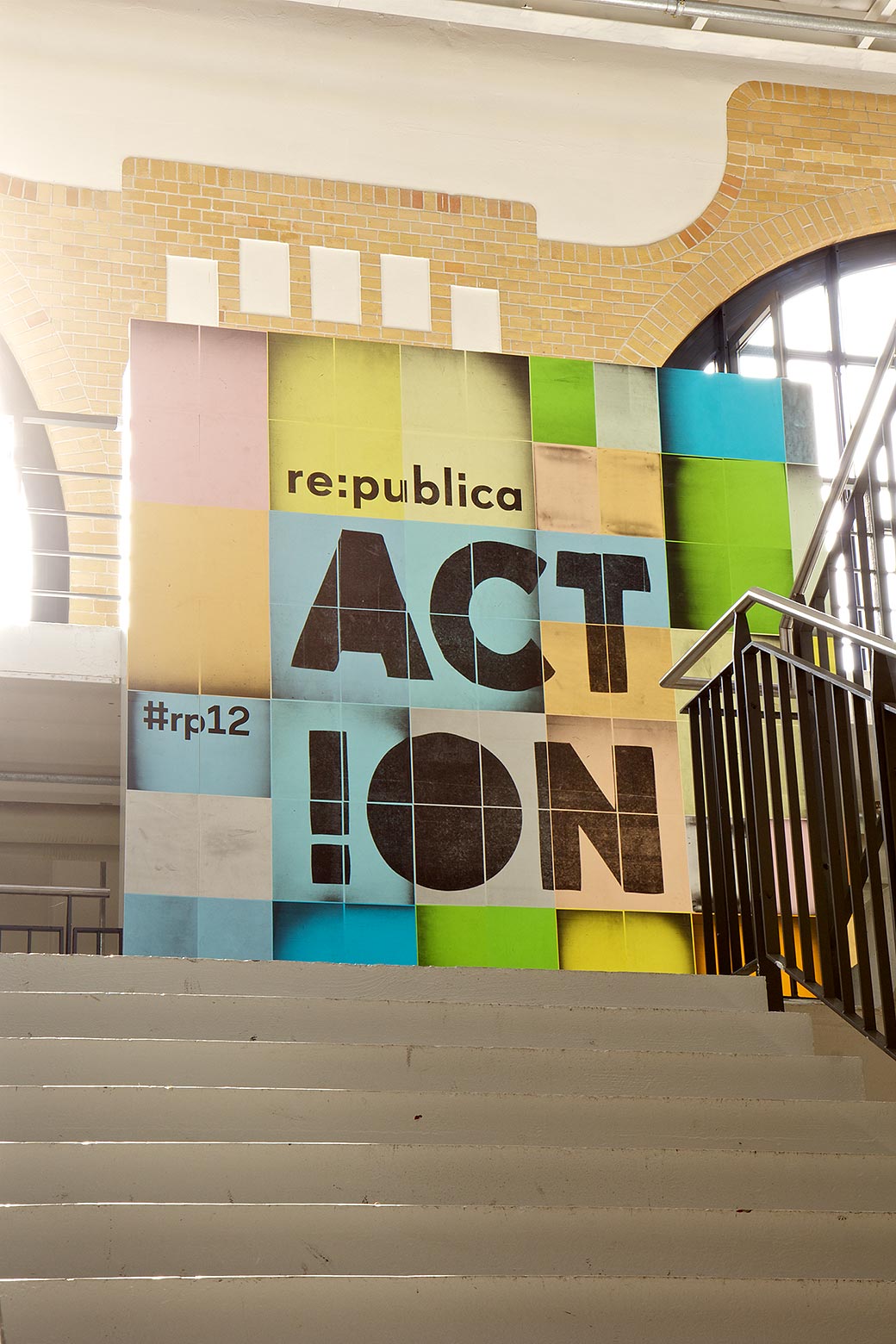 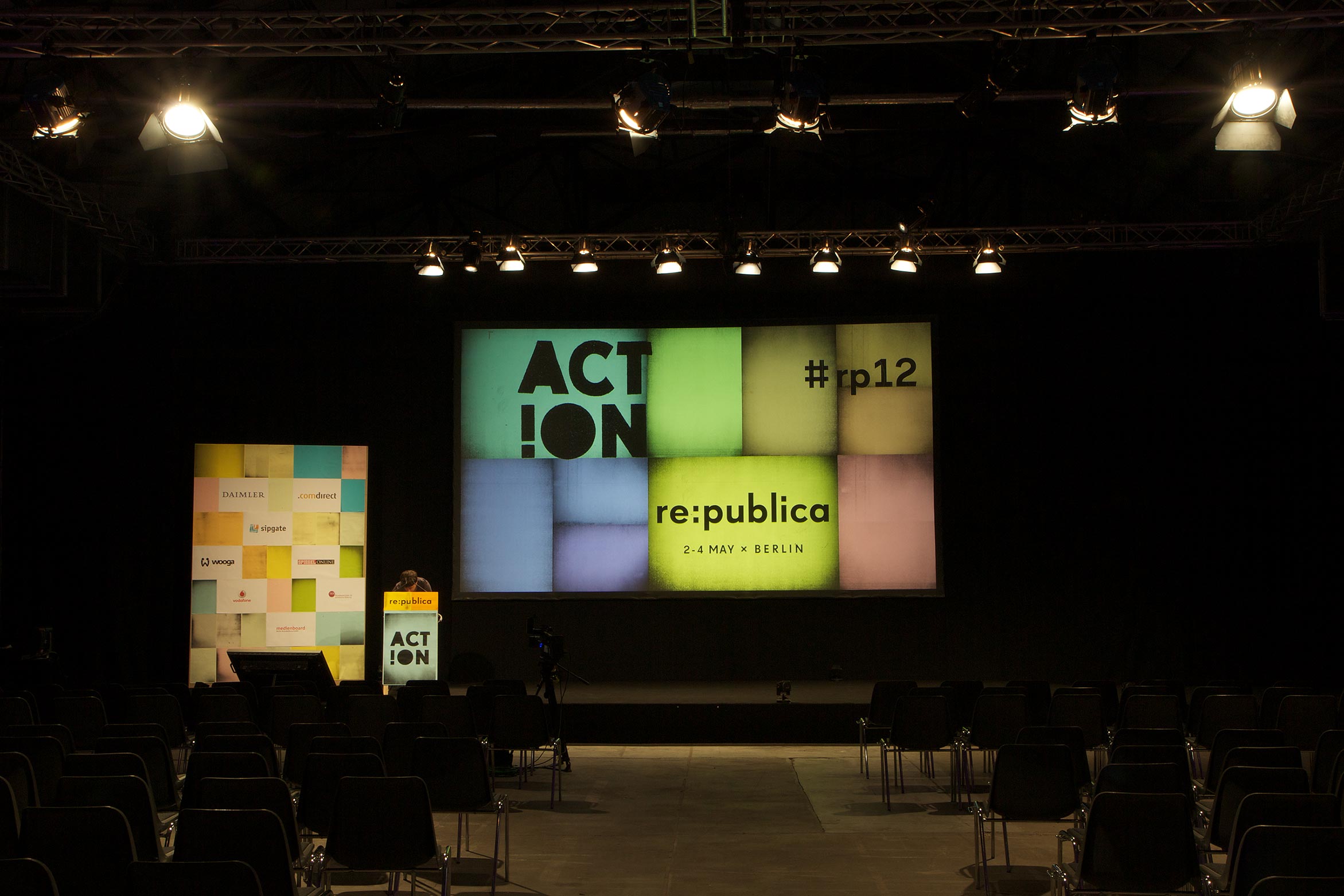 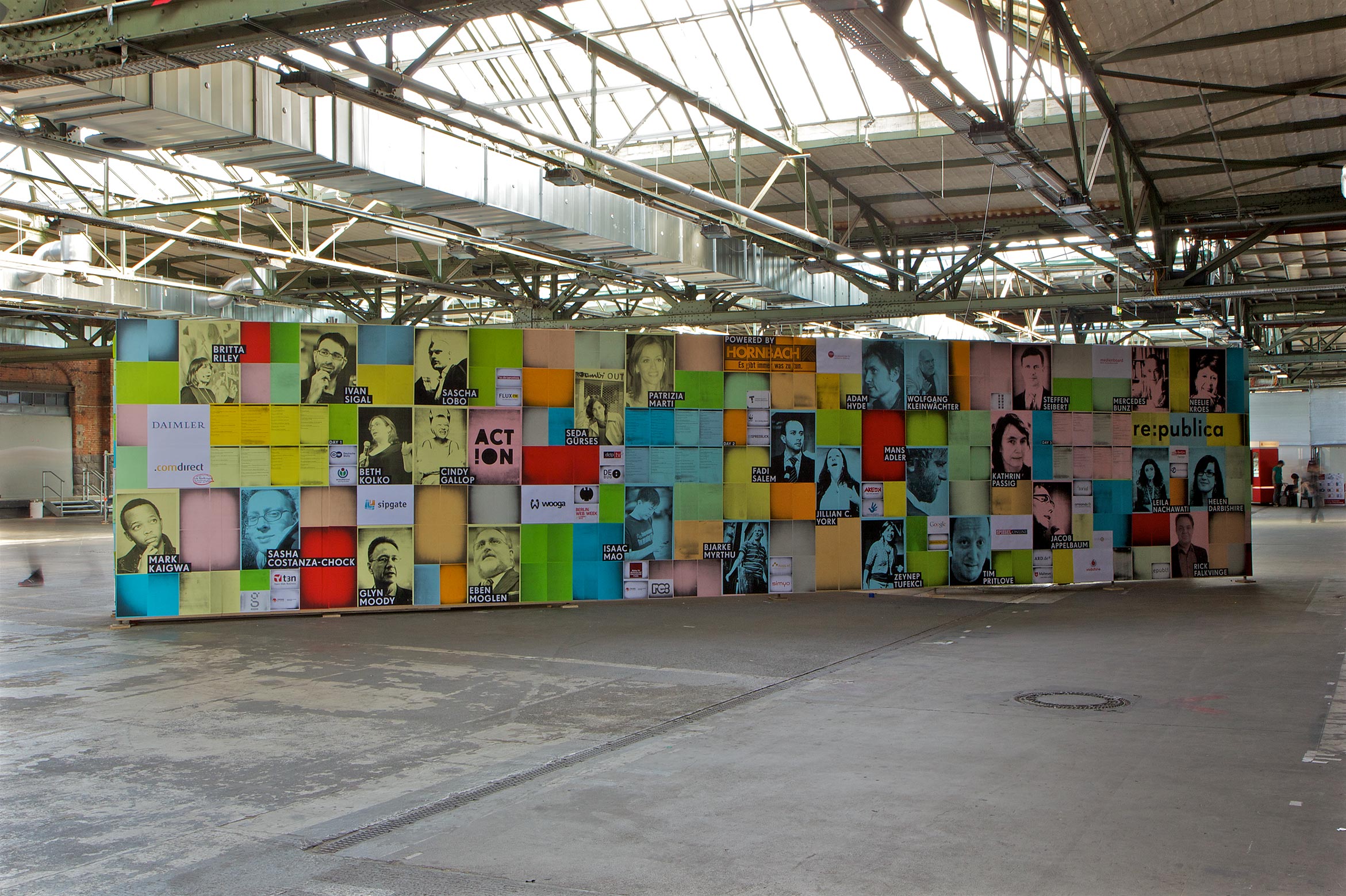 The back of the Twitter wall served as a bulletin board, informing visitors about upcoming talks and sessions.
More images of the conference at the official re:publica flickr account:
Day 1, Day 2, Day 3, Press photos

Thanks to Christopher Jung and Tobias Wenig for their support before and during the event. raumlabor for transforming our ideas into space and stimulating our thinking with their concepts. The node.js and processing community for providing bits and pieces for the software. The "Actionists" for diligently glueing the tweets to the wall. The whole re:publica team for having an unforgettable time.